Using the SARS CoV-2 published sequence, Bio SB has developed and manufactured the CoV-2 recombinant proteins and peptides needed to generate antibodies to identify the virus, receptors and IL’s by Immunohistochemistry and Immunofluorescence on FFPE biopsies. Additionally, Bio SB has developed antibodies to identify the ACE-2 and TMPRSS2 receptors and has a large amount of CD (B and T Lymphocytes, NK Cells, Monocytes, Macrophages), and other markers for immune response factors (IL-1a, IL1b and IL-6) and vascular cells with the intention to asses the pathological damaged caused by the COVID-19 infection using single and multiplex Immunohistochemistry and Immunofluorescence on FFPE COVID-19 positive biopsies.

The first reports of the viral infection attracted attention in late December 2019 in Wuhan, the capital of Hubei, China. Later, it was revealed that the virus responsible for causing the infections was contagious between humans. By early January 2020, terms like “the new coronavirus” and “Wuhan coronavirus were in common use. On February 11, 2020, a taxonomic designation “severe acute respiratory syndrome coronavirus 2” (SARS-CoV-2) became the official means to refer to the virus strain that was previously termed as 2019-nCoV and Wuhan coronavirus. Within a few hours on the same day, the WHO officially renamed the disease as COVID-191. SARS-CoV infected a total of more than 8,000 persons with 774 deaths in 37 additional countries in 2003.

As of May 24, 2020 COVID-19 has infected 5,442,507 people worldwide and killed 345,036, making it more deadly than the pandemic observed with the SARS-CoV outbreak in 2003 (https://www.bloomberg.com/graphics/2020-coronavirus-cases-world-map/). Even more serious, the COVID-19 virus could be widely transmitted by asymptomatic carriers to other people in close contact and some of the patients will still carry the virus even after they recover from the disease.

SARS-CoV-2 patients can experience a diversity of issues – from mild symptoms to severe illness. These symptoms generally appear 2-14 days after exposure to the virus. Studies show that patients may be most infectious in the days before they began showing symptoms. The main initial symptoms of SARS-CoV-2 are chills, muscle pains, headache, sore throat and loss of taste and smell. At least 80 percent of those known to be infected with SARS-CoV-2 appear to mount a typical immune response. In a normal immune response, several different types of immune cells (lymphocytes) and chemical messengers are released in an intricate sequence, causing a mild localized inflammatory state. 6,7

Currently we have little macroscopic and microscopic information about the pathological damage being caused by SARS-CoV-2. The macroscopic features of SARS-CoV-2 are likely to be in the chest and may include pleurisy, pericarditis, lung consolidation and pulmonary edema. Lung weight may be increased above normal. It should be noted a secondary infection may be superimposed on the viral infection that can lead to purulent inflammation typical of secondary bacterial infections. Microscopic findings are nonspecific, including edema, pneumocyte hyperplasia, focal inflammation, and multinucleated giant cell formation with generalized diffuse alveolar damage with exudates. The inflammation is predominantly lymphocytic, and multinucleated giant cells seen alongside large atypical pneumocytes, with no definitive viral inclusions noted. In general, features are very similar to those seen in SARS and MERS-coronavirus infections. 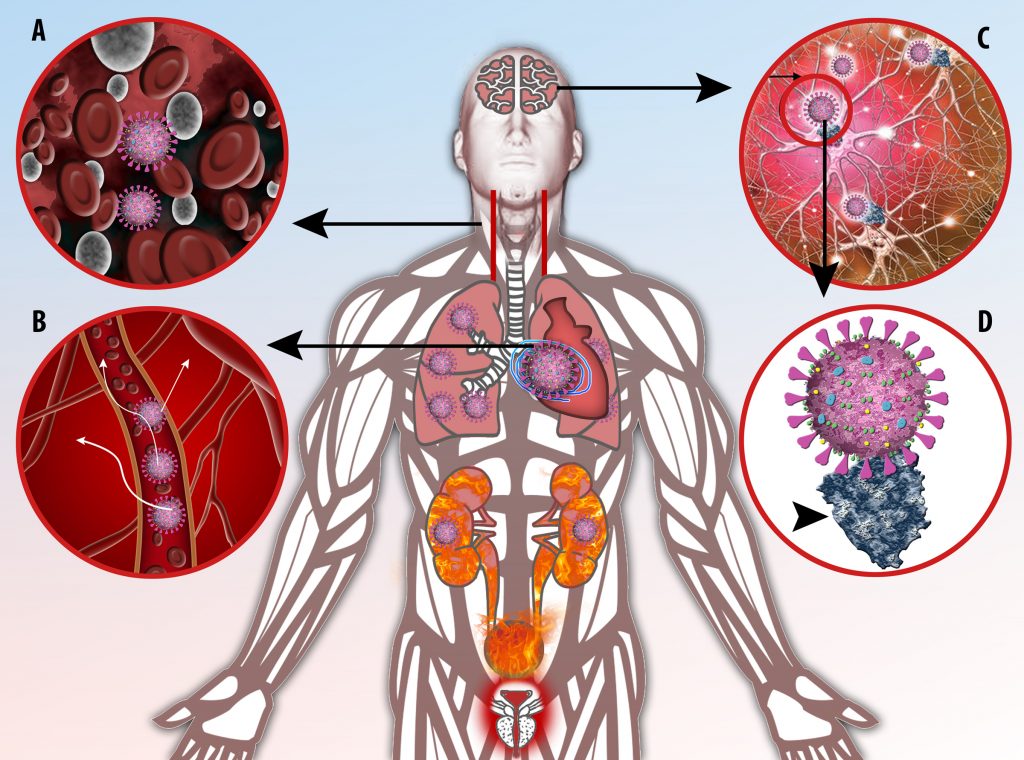 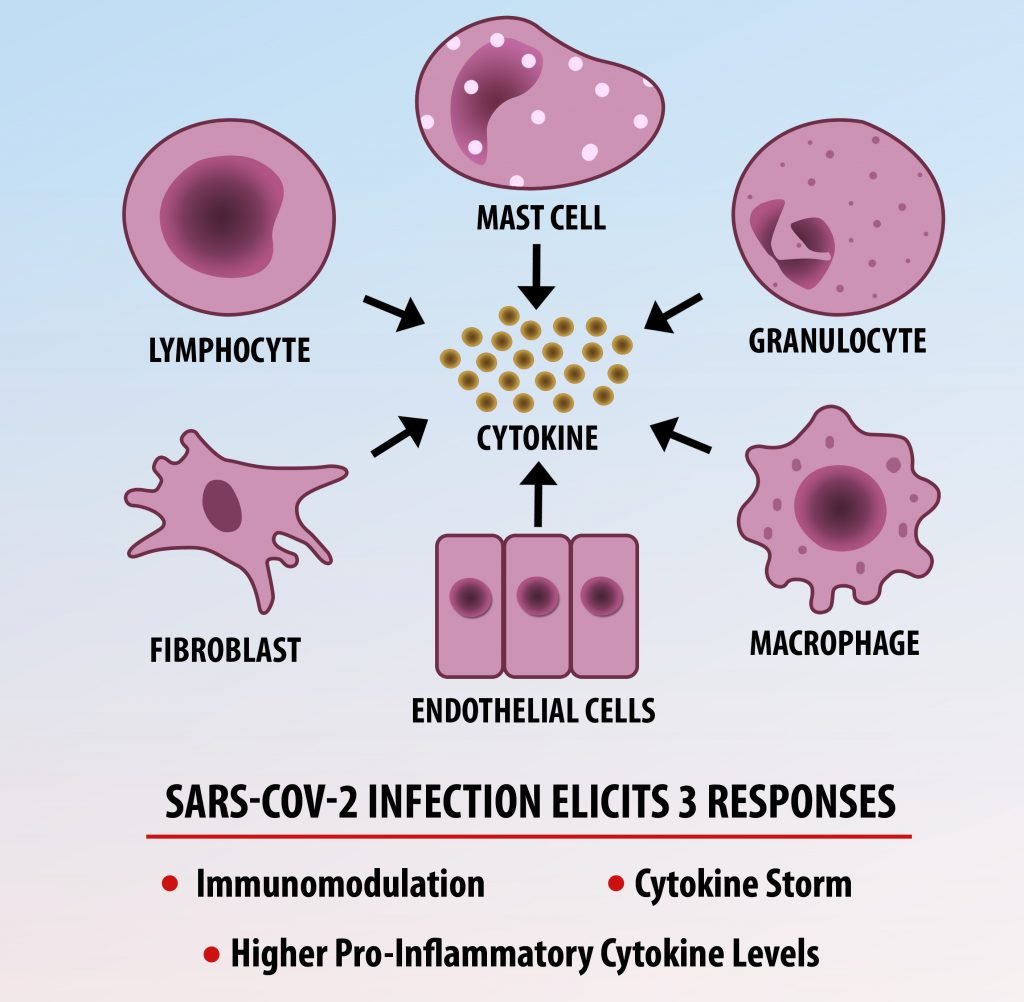 The vast majority of patients with COVID-19 have had a good prognosis, but there are still some critical individuals and even death.10 Most of these critically ill and dead patients do not develop severe clinical manifestations in the early stages of the disease. Some patients only show mild fever, cough, or muscle soreness. These conditions suddenly deteriorate in the later stages of the disease or in the recovery process . Acute respiratory distress syndrome (ARDS) and multiple-organ failure occur rapidly, resulting in death within a short time. Cytokine storm is considered to be one of the major causes of ARDS and multiple organ failure.

Cytokine Storm Syndrome (CSS) is characterized by systemic symptoms and signs derived from a massive and uncontrolled inflammatory response caused by pro- and anti-inflammatory cytokine dysregulation. Viruses, such as Herpes and Epstein-Barr are known to trigger CSS, as is H5N1 influenza. Current literature indicates that SARS-CoV-2 triggers CSS and has been attributed to the severe symptoms’ characteristic of critical patients. CSS in these patients is often fatal, as was the case in the previous SARS and MERS outbreaks.

The first cytokines released are interleukin 1β (IL-1β) and tumor necrosis factor-α (TNF-α), which attract a variety of circulating white blood cells (WBCs) to the infection site, including neutrophils, monocytes, macrophages, and natural killer (NK) cells. This response, along with the antipathogenic chemicals released by these cells (i.e., complement), comprise the innate immune response. These cells directly attack the invading pathogen and also release additional cytokines, chief among them interleukin-1 and 6 (IL-6). IL-6 is essential for invoking the adaptive immune response, which calls T-cells, B-cells, and T helper (Th) cells to the infection site. IL-6 also stimulates further recruitment, proliferation and activation of macrophages.

It is the ICU physician who is most likely to witness one of the deadliest manifestations of the abnormal immunological response, the cytokine storm syndrome (CSS). This response is also referred to by some as the cytokine release syndrome (CRS). CSS is characterized by continuous activation and expansion of macrophage and lymphocyte populations, which secrete large amounts of cytokines, causing the cytokine storm. This massive cytokine release is akin to hemophagocytic lymphohistiocytosis (HLH) disease, a syndrome characterized by initial unchecked and persistent activation of cytotoxic T lymphocytes and NK cells.

Clinical and laboratory manifestations of HLH include fever, enlarged liver and/or spleen, neurologic dysfunction, coagulopathy, liver dysfunction, cytopenias (i.e., low levels of erythrocytes, leukocytes, and/or platelets), hypertriglyceridemia, hyperferritinemia, hemophagocytosis, and eventually diminished NK cell activity as the immune system becomes progressively paralyzed. HLH can be familial (primary HLH) or secondary to another disease process (sHLH), such as rheumatic disease, in which it is referred to as macrophage activation syndrome (MAS, characterized by elevated ferritin).

This activation induces inflammatory monocytes to highly express IL-6, starting a localized and then systemic cascade effect that results in hyperproduction of IL-6, which accelerates the inflammatory process. Because IL-6 also increases vascular permeability, excessive levels cause blood vessels to become very leaky. This, along with clotting factors released from vascular endothelial cells, stimulates the coagulation cascade, resulting in microthrombosis (tiny clots), which leads to ischemia and tissue death of the kidney, intestines, heart, liver, brain and extremities. 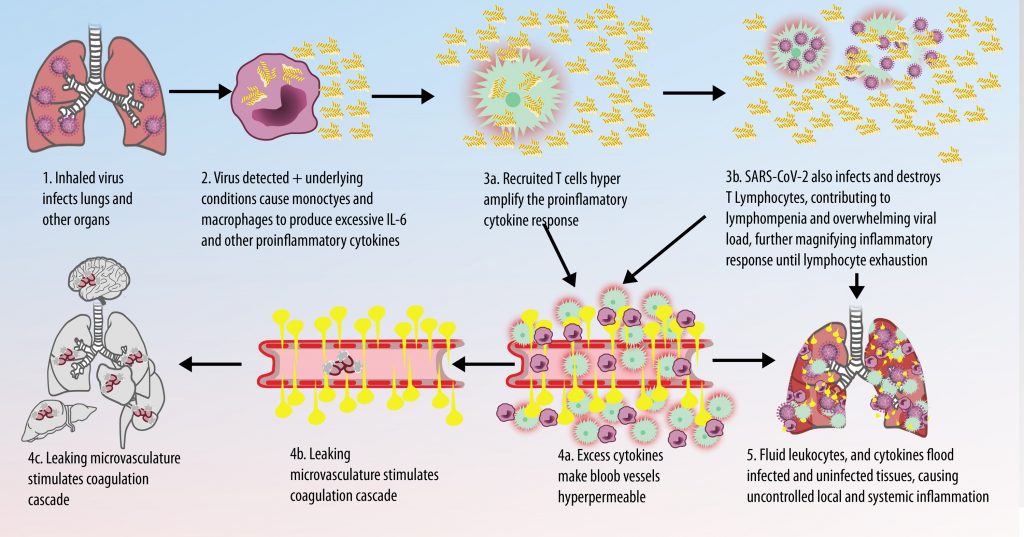 When infection occurs, the immune system responds by releasing dozens of pro- and anti-inflammatory cytokines. Interleukin -6 (IL-6) is hypothesized to be a key component of the cytokine response. The sequences are highly simplified overviews illustrating the dysregulated immune response resulting in CSS.